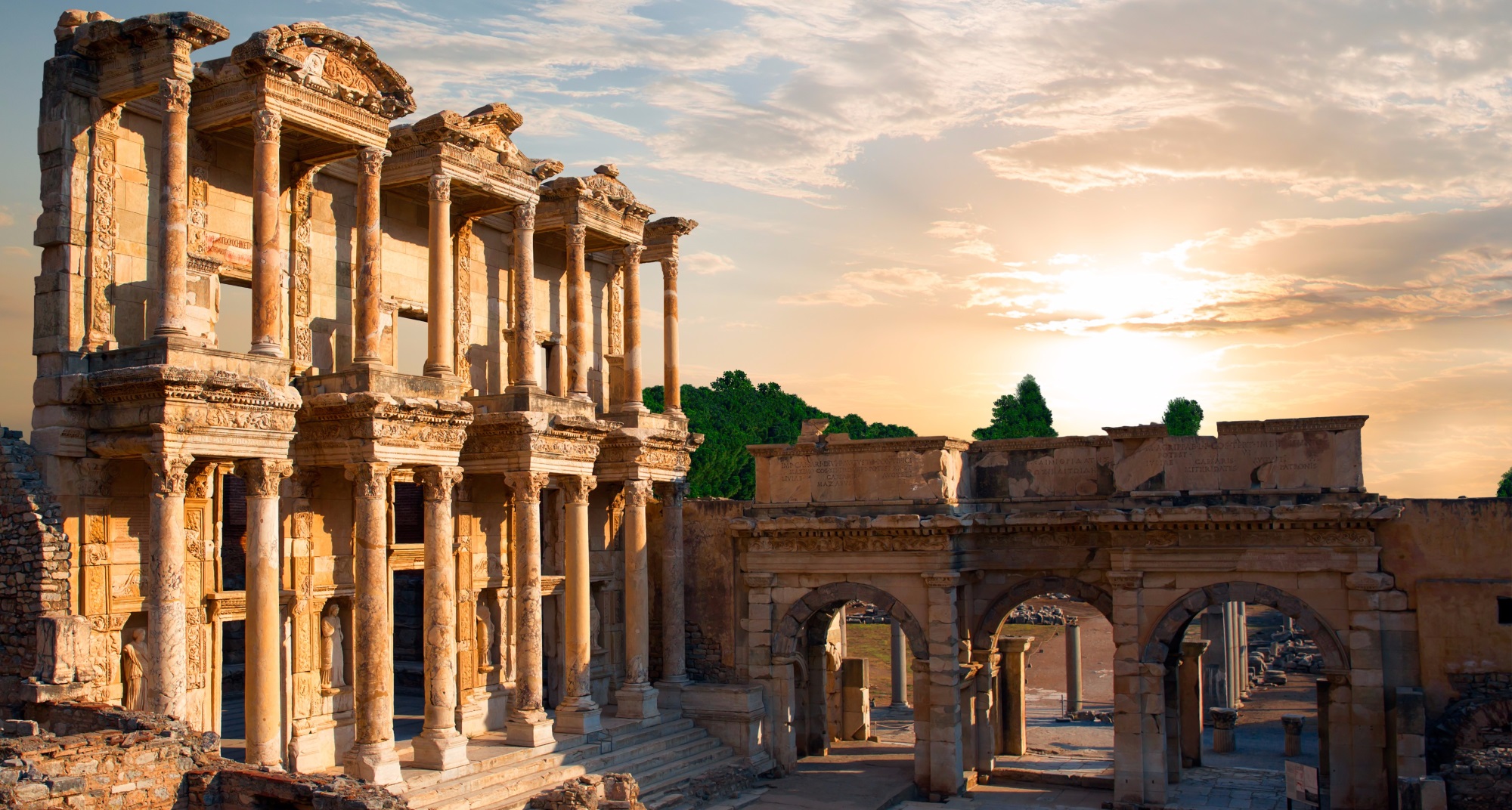 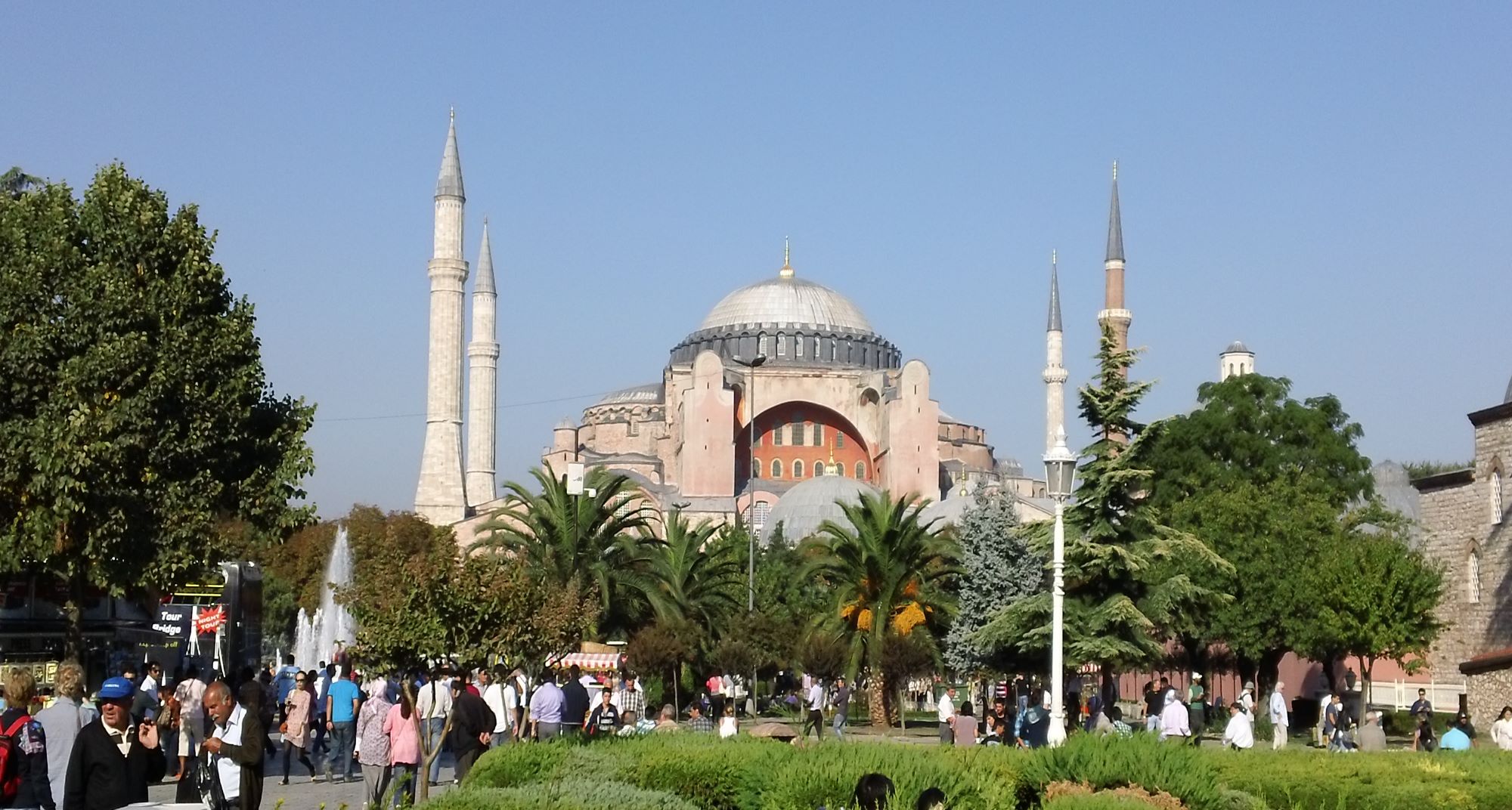 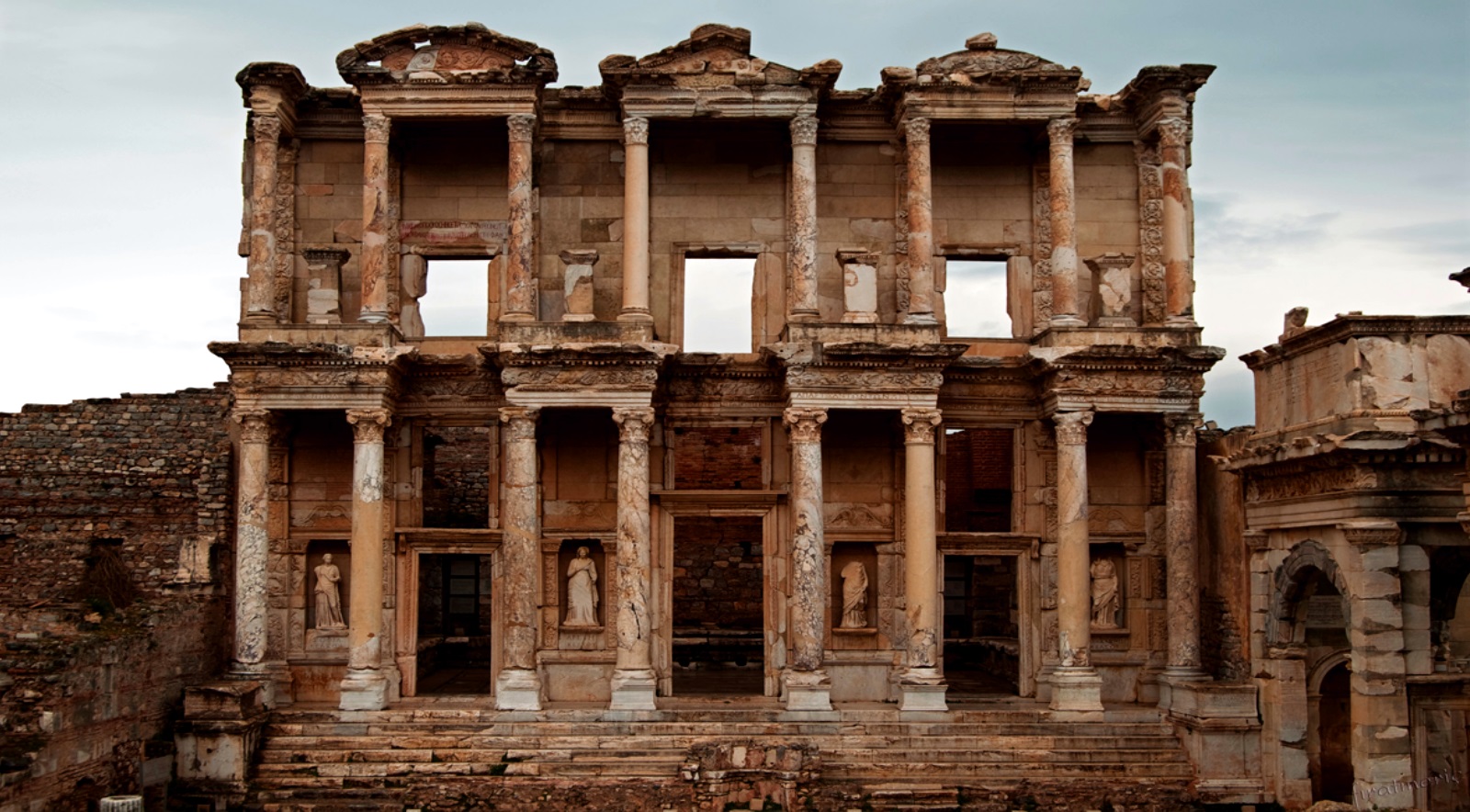 Istanbul & Kusadasi. Arrive today in Izmir via Istanbul, and continue to Kusadasi on Turkey's Aegean coast. The area has been a crossroads of art and culture since it was founded 5000 years ago, and was the final destination of medieval caravan routes from the Orient. Today, Kusadasi is a popular resort town for Turks and Europeans and a port of call for many cruise ships. Accommodations: Fantasia Hotel. Dinner provided.

Ephesus. Today, visit the glorious city of Ephesus, founded more than 4000 years ago, the capital city of the Roman Province of Asia Minor. The Temple of Artemis, one of the Seven Wonders of the Ancient World, is represented by one column and fragments of a frieze. Walk through the ancient streets to view the magnificent structures such as the Library of Celsus, Temple of Hadrian, and the Great Theater. Ephesus is also the town where St. Paul and St. John lived during the first century. Continue to the House of the Virgin Mary, where Mary spent her last years living near a grove of olive trees. A visit is considered a pilgrimage by the Vatican. Enjoy the evening at leisure. Breakfast & dinner provided. 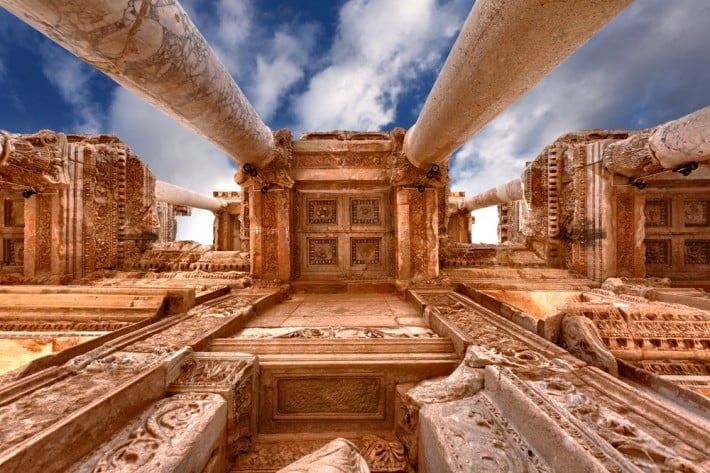 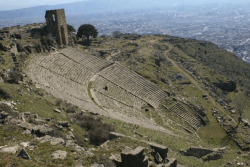 This morning, visit Pergamon, the capital of a powerful kingdom during the Hellenistic period in the first century. Visit the ruins of the Red Basilica, a temple built by Roman architects in the 2nd century AD utilizing red brick on a massive scale and incorporating a number of unique water features. It is believed that the temple was originally used for the worship of Egyptian gods and may have been used to simulate the flooding of Nile. It was later converted into a Christian church by the Byzantines and finally a mosque by the Turks.

Continue to the nearby Asklepion, a famed ancient medical center built in honor of Asklepios, the god of healing. It was also the site of the world's first known psychiatric hospital. In the ancient world, this was the place famous people wanted to attend for bathing treatments, the interpretation of dreams and drinking the water from the sacred fountain.
Finally, visit the ancient city of Troy, best known as the focus of the Trojan War as described in the epic poem by Homer. The ancient city today is an expansive archaeological site and a UNESCO World Heritage site. Dinner and overnight at your hotel. Accommodations: Hotel Akol. Breakfast & dinner provided. 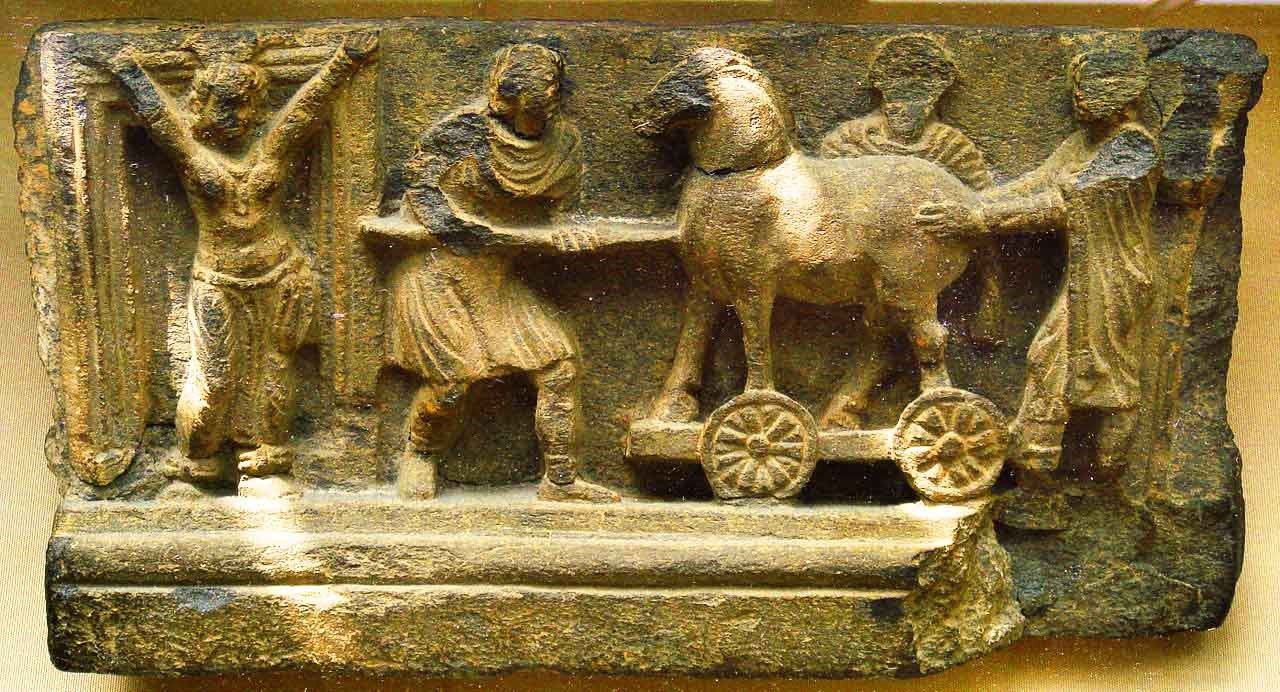 Canakkale, Dardanelles & Istanbul. Continue north by ferry across the Dardanelles, a narrow straight connecting the Aegean Sea with the Sea of Marmara. This strait, like the Bosphurus in Istanbul, separates Europe from Asia. Visit Gallipoli, where one of the fiercest battles of World War I took place. The Gallipoli campaign was the first major battle undertaken by the Australian and New Zealand Army Corps (ANZAC). The struggle laid the grounds for the Turkish War of Independence and the foundation of the Republic of Turkey, led by Mustafa Kemal Ataturk. Continue on to Istanbul and check into your centrally located hotel. Enjoy an afternoon at leisure. Accommodations: Kent Hotel Istanbul on all others. Breakfast provided.

Istanbul. Enjoy a full day in Istanbul at leisure.

Optional Excursion: You may choose an optional cruise on the Bosphorus and a visit to the Egyptian Bazaar. Cruise the straits that separate Europe and Asia, passing by the villas and palaces of the Ottoman Empire, as well as little fishing villages. The route zigzags across the straits for picture-perfect views of Istanbul and the Bosphorus Suspension bridges. Disembark from your cruise and continue to the Egyptian Bazaar, also known as the Spice Market. You will be surrounded by the aromas of spices and oils as you explore the diverse shops of this famous bazaar. This optional excursion can only be purchased locally ($55 per person).

In the evening, you may also choose an optional Istanbul by night with dinner and show, experiencing local cuisine and folklore. This optional excursion can only be purchased locally ($80 per person). 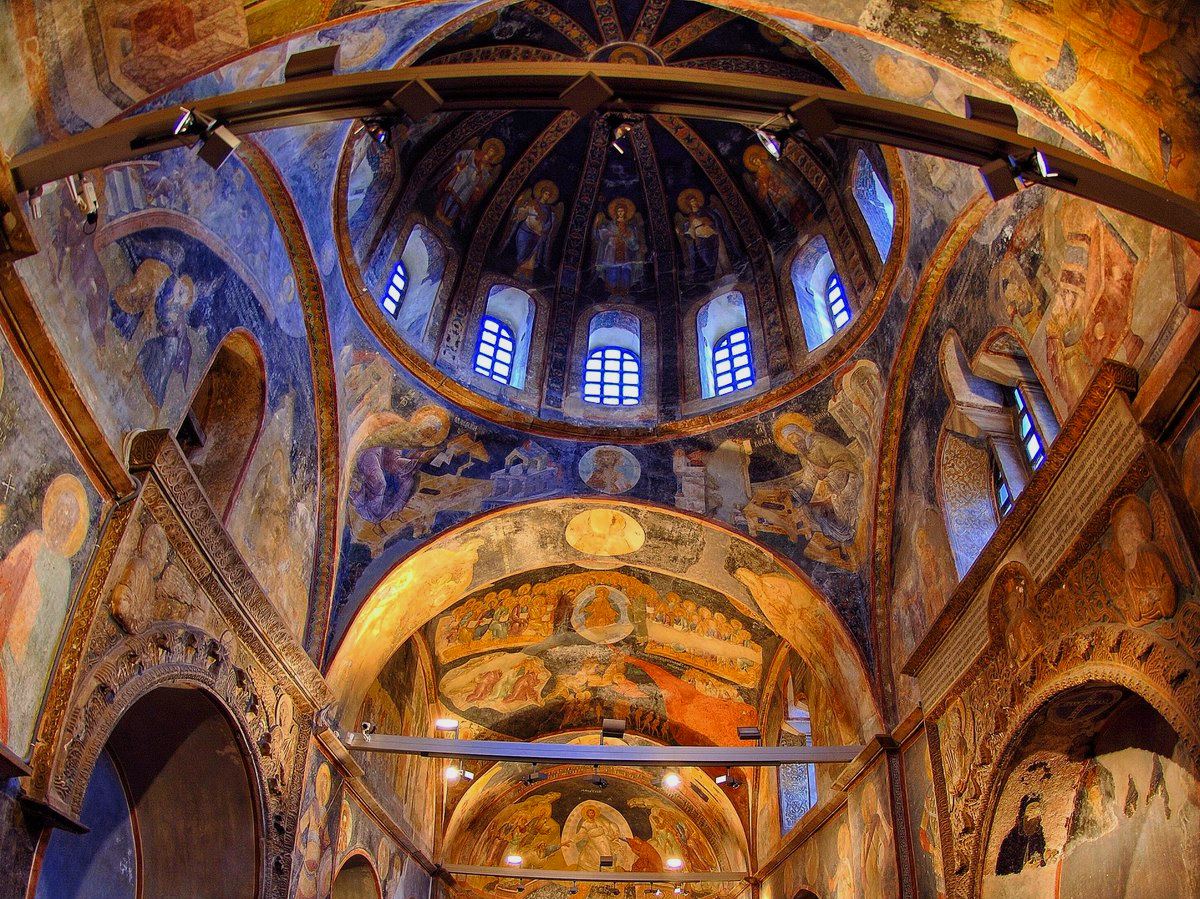 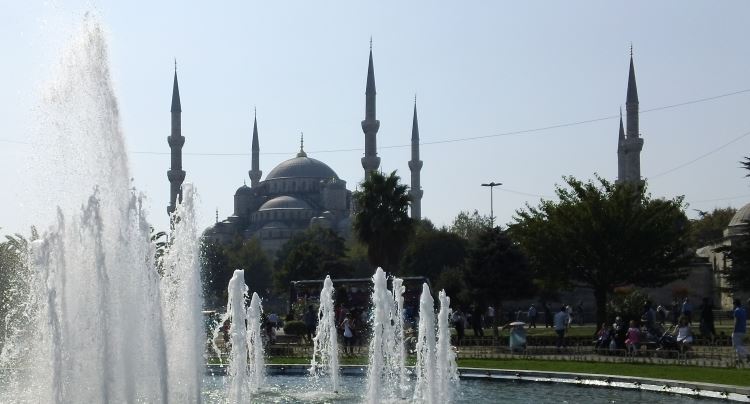 Istanbul. This morning, visit some of the unique and iconic sites in the city. Start your tour at the Sultanahmet Mosque, known as the Blue Mosque for the tiles and paint adorning its interior. Built between 1609 and 1616 on the site of several previous palaces is considered to be the last great mosque of the classical period, and even today it is a truly epic sight. More than 200 stained glass windows admit natural light, the floors are covered with thick carpets, and the walls are decorated with incredibly intricate tile work and verses from the Qur'an, many by Seyyid Kasim Gubari, the greatest calligrapher of his time.

Later visit nearby Hagia Sophia, also known as Ayasofya, built by the emperor Justinian I between 537 and 543 AD. The Hagia Sophia is famous for its massive dome and Byzantine architecture, which inspired much of the Blue Mosque. Built as an Orthodox basilica, and later became a mosque and finally a museum in 1935. The balance of the day is at leisure to explore this fascinating city, or take one of our optional tours. Breakfast provided.

Optional Excursion: This afternoon, enjoy an optional excursion to Topkapi Palace and the Grand Bazaar. The Topkapi Palace was residence of the Ottoman Sultans for more than 400 years. The palace became a museum of the imperial era in 1924. The palace complex has hundreds of rooms and chambers, with the most important being accessible to the public today. The palace houses a large collection of porcelain, robes and armor, as well as Ottoman miniatures and jewelry. Next visit the Grand Bazaar, one of the largest and oldest covered markets in the world. The bazaar was opened in 1461 and today there are over 1200 stores, many of which are grouped by the type of goods, with special areas for leather coats, gold jewelry, and other wares. This optional excursion can only be purchased locally ($50 per person). 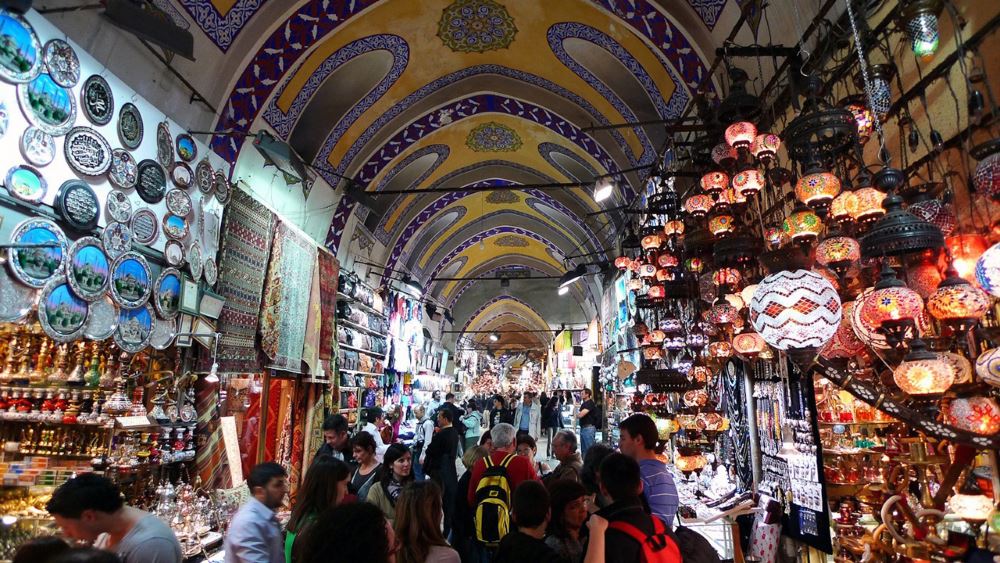